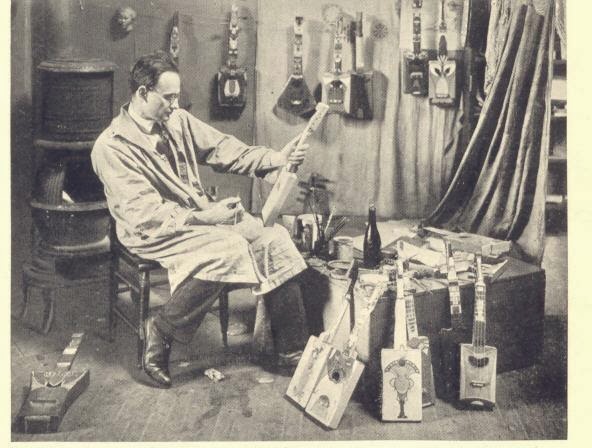 Check out this photo and story that a friend Ricardo Cota Do Álamo from Facebook found.
This man's name is Bobby Edwards, who played and made ukuleles in Greenwich Village in the ‘teens and ‘twenties, and established himself as one of the Village’s most conspicuous and colorful personalities.
He was born in Buffalo in 1879, and died in New York City in 1948. He graduated from Harvard in 1901, and attended Chase Art School; and worked for a while as an illustrator. He then settled in the Village to pursue a merry, disorganized career as a sometime artist, performer and writer — and full-time Bohemian. He advertised himself as “Maker of the Ukalyptos, Second Cousin of the Ukulele. Painting, Poetry, Movie Acting, Music, Singing, Illustrating and General Art Work Neatly Done. Also Contracts Taken to Make Restaurants Famous. Terms for Singing at Parties on Application. Also Portrait Photography.”
He edited the quintessential Village magazine, The Quill (from which the above promotion was taken), and filled its pages with verses, songs, gossip, and photos of his cats romping through his famously cluttered studio. He also contributed to The Masses, Broadway Brevities, and other periodicals.
But he was best known for his performances in clubs and revues, where he sang his comic songs, strumming a brightly painted cigar box uke. He not only made the uke himself, but turned out others to sell to tourists.