check out this old newspaper clipping I found in a library, its hard to read, so I will re type it here for you to enjoy. 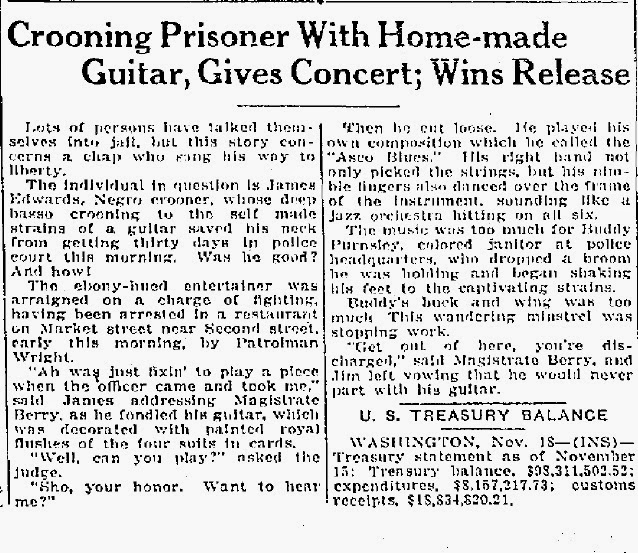 
Lots of persons have talked themselves into jail. But this story concerns a chap who sang his way to liberty.
The individual in question is James Edwards, Negro crooner, whose deep basso crooning to the self made strains of a guitar saved his neck from getting thirty days in police court this morning. Was he good?
The ebony-hued entertainer was arraigned on a charge of fighting, having been arrested in a restaurant on market street early this morning, by Patrolman wright.
"Ah was just fixin' to play a piece when the officer came and took me" said James addressing the Magistrate as he fondled his guitar, which was decorated with painted flushes of the four suits of cards.
"Well, can you play?" asked the judge.

Then he cut loose. He played his own composition when he called the "Asco Blues". His right hand not only picked the strings but his nimble fingers also danced over the frame of the instrument, sounding like a jazz orchestra hitting on all six.
The music was too much for Buddy Purnsiey, colored janitor at police headquarters, who droped a broom he was holding and began shaking his feet to the captivating strains.
Buddy's back and wing was too much. This wandering minstrel was stopping work.

"Get out of here, you're discharged," said magistrate Berry, and Jim left vowing that he would never part with his guitar.