86 years young and building cigar box guitars!
This is what I love about American Tradition and Homemade guitars, good folks like Levoy Saltzman.. He is one of America's "Greatest Generation." I would love to spend an afternoon in his workshop, heck I would love for him to be my Grandpa! So much wisdom and interesting topics he could pass on to those that would want to listen.

Anyways, This awesome story came up in a local newspaper from Shickley, Nebraska 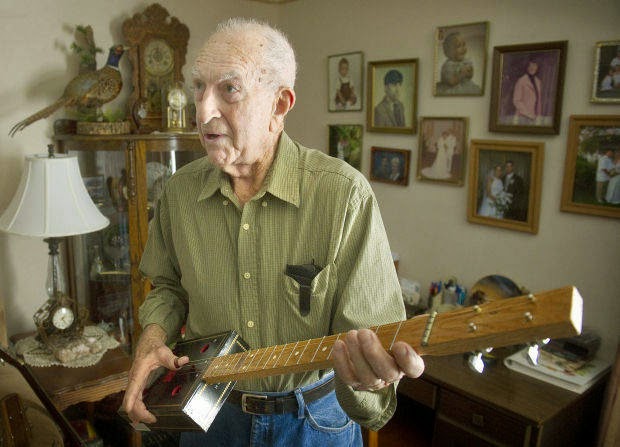 He belts out the first few verses of "This Land is Your Land" and then a gospel song.
"I play mostly in the key of C because it matches my voice," said the 86-year-old retired farmer and carpenter who lives in the Fillmore County town of Shickley.
He made the guitar from a cigar box and odds and ends scavenged from yard sales, auctions and music stores. Friends and family members pick up the boxes here and there and give them to Saltzman, or he buys them at a tobacco shop in Hastings.
He doesn't smoke, but he knows what type of cigar boxes work best for his homemade guitars. Wood boxes have a better sound, but it's hard to find them in the right size, so he likes to use deep ones made from cardboard and paper.
"They all have just a little bit of a different sound because of the size of the box and the way it resonates," Saltzman said.Everything about his guitars is simple.He cuts the necks from the leaves of oak dining tables. Oak doesn't warp easily, Saltzman explained, and table leaves are cheaper to buy than new wood from a lumber yard.
He makes the top bridges from 3/8-inch diameter bolts, which guide the guitar strings. He buys the bolts long and cuts them to fit wide or narrow necks.Saltzman fashions the lower bridges out of plastic toothbrushes -- not the fancy curved ones but ones with straight handles.
He makes frets from sixpenny nails with the heads and points cut off, and he buys used string tighteners from music stores.Saltzman has made 14 cigar box guitars this year and sells them at local craft fairs."I really can't make them fast enough. I'm all out," he said.The acoustic version costs $50. He sells an electric model guitar for $60.
"You can drive somebody out of the room when you plug it into an amplifier," said Saltzman, who uses a Piezo buzzer as a pickup to magnify the guitar's sound.
He finds the large button-like devices in the handles of old rotary dial telephones that were common during the 1960s. Saltzman hooks the buzzer wires to a jack that he glues to the inside of a cigar box.
Sometimes he dresses up a guitar by placing gold-colored grommets around the circles he drills into a cigar box lid, so the sound can escape. He also uses other types of wood as decoration.
Saltzman began playing guitar about five years ago and said it took him a day or two to get the hang of it. He also plays harmonica and button accordion.
He began making cigar box guitars after reading a magazine article about a man from the Grand Island area who made them as a hobby. Saltzman thought he'd give it a try and did some research on the Internet.Now, he makes them in his garage, spending about 15 hours on each instrument.
Making guitars out of ordinary things is nothing new, Saltzman said. During the 1920s and '30s when money was scarce, people made them out of all sorts of boxes. They even used metal wash tubs to make stand-up basses.
"A lot of folks say they have not seen them before," he said of his cigar box creations. "The musicians know what they are, but a lot of people don't."Saltzman used to take along a cigar box guitar when he and his late wife, Norma, performed at nursing homes. She played the piano accordion and keyboards.He still plays and sings occasionally, including a June performance at Rock Creek Trail Days near Fairbury.
"I like music," Saltzman said, when asked why he makes his cigar box guitars.
Certainly, it's not for the money. The price of the guitars doesn't include his labor.
"I need something to do. I can't go out and build a house anymore ... I have to work with my hands," Saltzman said.