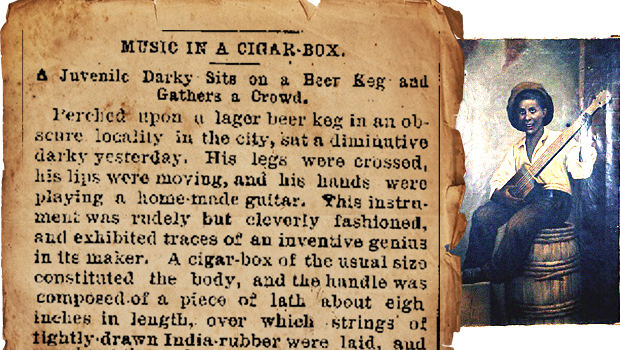 Some phrases and descriptions in the 130-year-old article are considered offensive by today's standards.

MUSIC IN A CIGAR BOX.
A Juvenile Darky Sits on a Beer Keg and Gathers a Crowd
Galveston (TX) Daily News.  Thursday, April 15, 1886
Perched upon a lager beer keg in an obscure locality in the city, sat a diminutive darky yesterday.  His legs were crossed, his lips were moving, and his hands were playing a home-made guitar.  This instrument was rudely but cleverly fashioned, and exhibited traces of an inventive genius in its maker.
A cigar-box of the usual size constituted the body, and the handle was composed of a piece of lath about eight inches in length, over which strings of tightly-drawn India rubber were laid, and caught at the end on roughly-made keys.  The box was completely inclosed, with the exception of a round hole in the center for a sounding-board.
Altogether, it was an original instrument, and though crudely constructed was capable of emitting melodious strains.  Considering the imperfections of it in the comparison with a genuine guitar, the player handled the strings very deftly.
When seen he was earnestly playing a tune, and no one appeared to enjoy it more than himself, though the barkeeper whose keg he was sitting upon came out and shaded his eyes on the curious object.  The selection was an old-time negro melody, and he soon had a crowd of sympathizers around him.  While playing, his different antics and motions were peculiar and amusing.  His lips went in and out, keeping perfect time to the music.  He swayed himself from side to side, shut one eye, then the other, then rolled both up until only the whites were visible, apparently in a perfect deliriam of enjoyment.
In the midst of all this a great catastrophe occurred.  The strings all snapped but one.  But to the wonder of those present he continued to draw music out of his one string.
As he finished and crawled down from his perch he was variously interrogated, but jumping into a small wagon hitched to a good-sized goat, he rapidly made off amid the shouts of the crowd and uproarious laughter.
It was evident that he did not wish to be bothered and had his goat handy for any disagreeable emergency.
________________________________________________________
Discovered by Shane Speal