Here is a photo from the 1880's or 1890's of camp life, check out that homemade guitar.
If you look closely at the tailpiece, you can see it that it looks to be well made and must have played and sounded pretty good. At least the guy holding it thought highly enough of his instrument to have himself photographed with it! 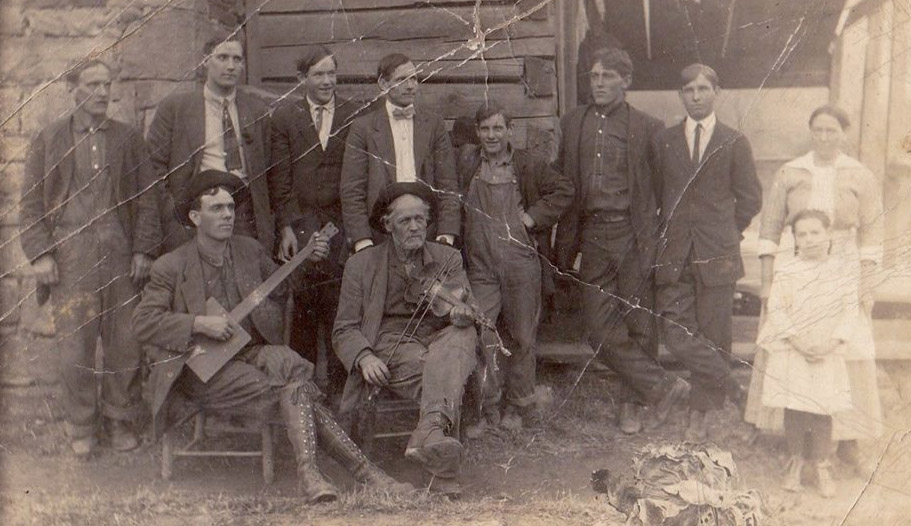 I find many of these old instruments for sale on ebay. In fact as you read along in this website, there are many pages and you'll see a lot of them. Not only photos of the instruments themselves, but I also have a large collection of antique photos of people playing or holding them.

I wanted to post some videos of cigar box guitar music and don't know which one to post first, so how about this one?


Cigar box guitars are SUPER easy to play and sound great.  Many people have tried to learn to play guitar and then give up because they were hard to learn....but cigar box guitars are different. They are super simple in nature to learn and play, watch this video above....BUT
Don't just listen passively,  watch the guitar parts and the playing. There really isn't much happing, just a simple pluck here and there a little bit of slide guitar back and forth....even with no experience you too can play in just a few weeks!
The key is that a cigar box guitar works FOR YOU because of the great sound they naturally have. These guitars have a vintage and raspy old time sound and require very little effort to play.
I find many of these old instruments for sale on ebay. In fact as you read along in this website, there are many pages and you'll see a lot of them. Not only photos of the instruments themselves, but I also have a large collection of antique photos of people playing or holding them. 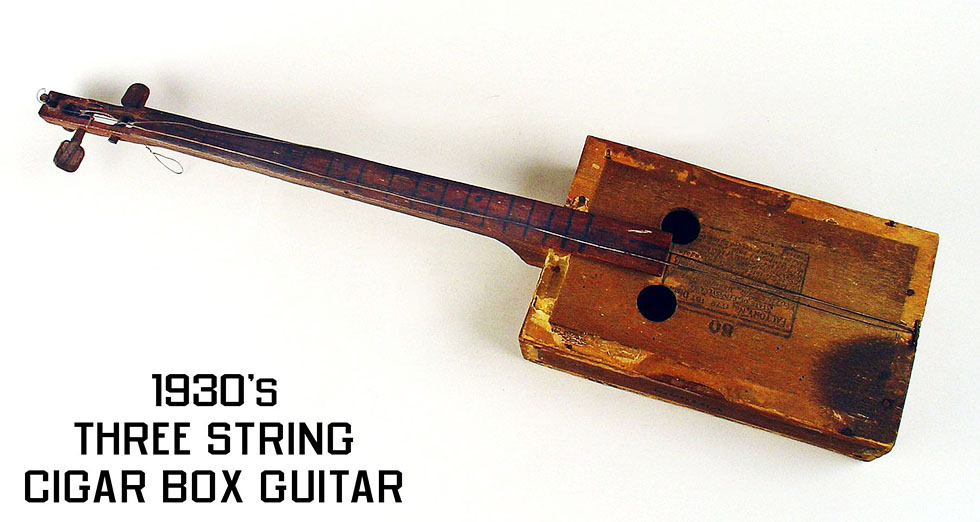 Check out this antique 3 string cigar box guitar, if you look close you will see that it's a 3 string guitar with one of the tuners coming up directly from behind the headstock. Also you will notice that the maker has carefully drawn out the fret markers. Since there is not actual frets, I believe it was probably used as a slide guitar.
I only wish I could hear it. Even though we can't hear that exact guitar we can listen to an acoustic 3 sting played with a slide and we can take a step back into that era.
What does that "old time" twangy goodness from long ago sound like?

Funny you should ask!

Have a listen to this cigar box guitar being played. It's a short scale homemade guitar similar to the one above. This video is recorded without electricity, no pickup or amplifier, nothing fancy, just a wooden neck bolted on an old cigar box.

Have a listen to this video.

If you build cigar box guitars, a quick tip to achieve a vintage "twangy" sound is to build a shorter scale neck. If you build in the 21 to 23 inch or so range, you can sharpen the instruments tone and it will also give the instrument a bit more pop and volume. It will be a slight bit more crisp in the attack and bite.
By using a shorter scale on an acoustic instrument without a pickup it will help you also achieve a louder volume naturally and make the instrument more playable without an amplifier.
It's not so easy to coax a great sound out of a an old used cigar box, but it can be done!

OK, for the record, I like electricity too!....sometimes it's just great.
Everyone always ask me the same question "What's my favorite amp?"..... It is by far the Pignose!
They just have the coolest sound. It actually has an almost tube like glass sound, and the price can't be beat.  You can buy one for about $80 bucks in just about any music store. 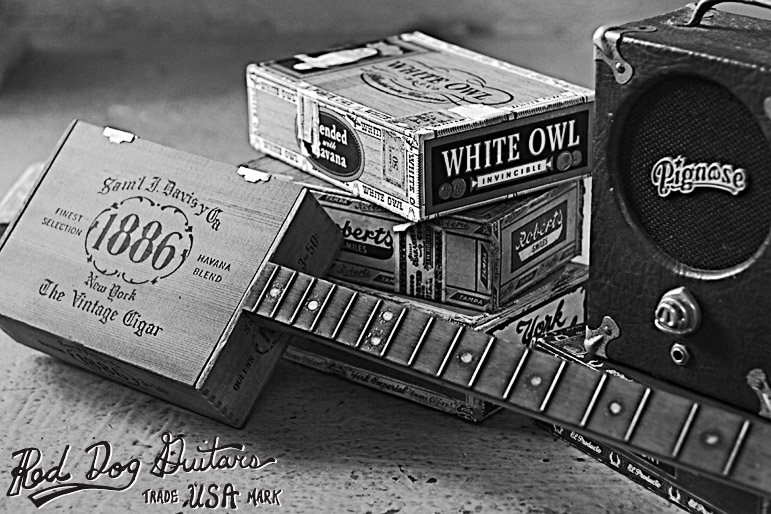 Have a listen to this wonderful old recording, 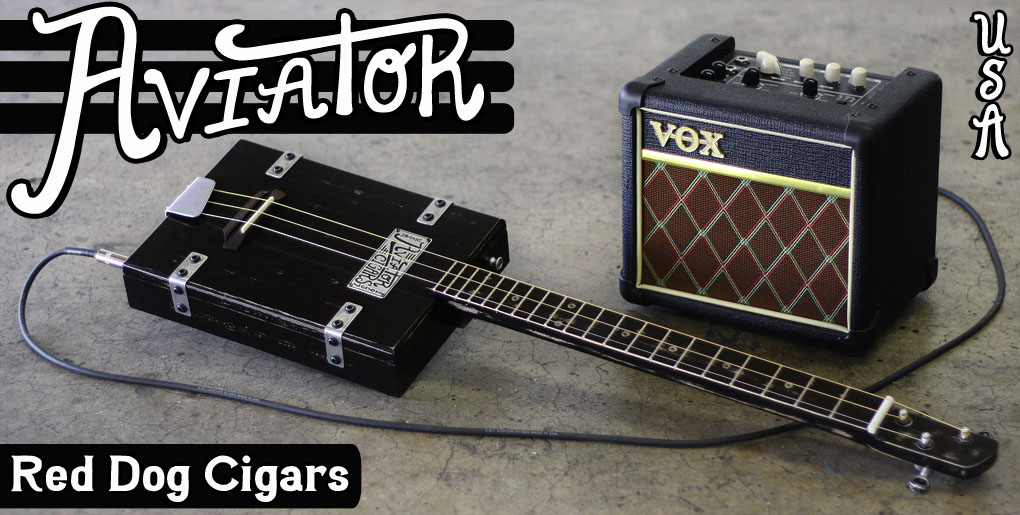 What can you do with a digital amp? Let's find out. 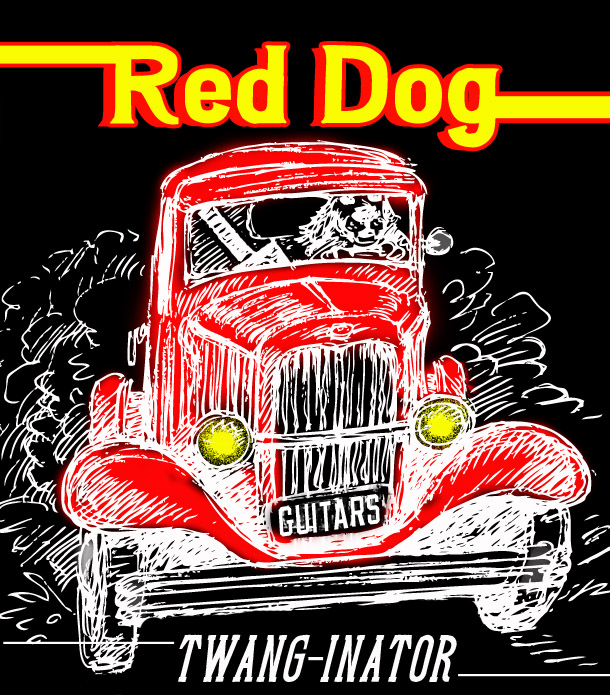 How about some of that twangy Hot Rod Music?

This song was recorded with both an acoustic 3 string guitar and then double tracked with an electric cigar box guitar.